In our previous recipes, we reviewed i- Ethereum, Solidity and how to use Hyperledger Seth to build blockchain application with Ethereum and ii-How to install Hyperledger Burrow on AWS. In this recipe, we show you how to write smart contracts with Solidity.

Remix (https:/​/​github.​com/​ethereum/​remix) and Truffle (https:/​/​truffleframework.com) are popular Ethereum development frameworks. You can use either of these to write smart contracts with Solidity for Burrow. For this recipe, we will use the online version of Remix to write a sample smart contract with Solidity, since this version is simple and easy to use. You can access it here: https:/​/​remix.​ethereum.​org.

In this smart contract, we will perform transactions to deposit coins, withdraw coins, and query the account balance. The smart contract looks as follows: 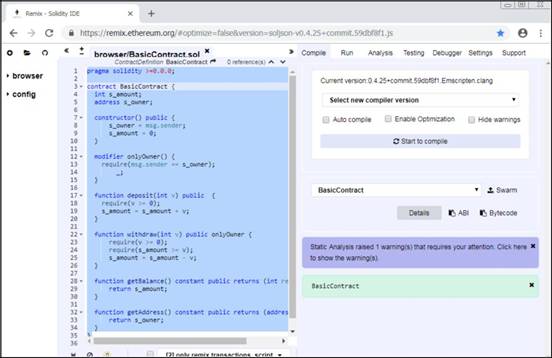 1. Create the new smart contract in the Remix browser.

This BasicContract.sol sample contract will keep the balance of an account, and the contract owner will be able to put deposits into and withdraw from the contract. Its code is as follows:

2. You can use the preceding code to create a new BasicContract contract in the Remix browser, as follows. Click on Compile to compile the contract to verify that there are no grammar or coding errors, as shown in the following screenshot: 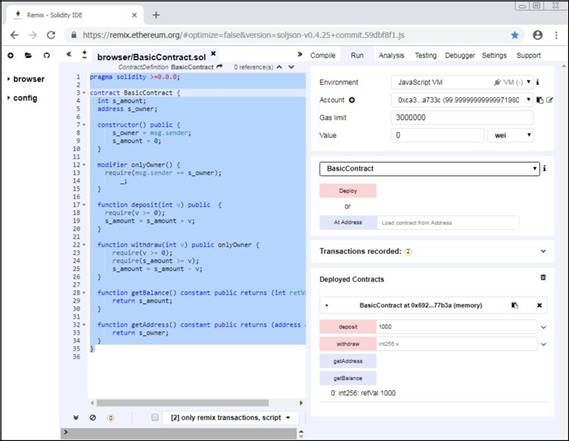 3. Run and test the contract in the Remix browser. After the contract is successfully compiled, you can go to the Run tab in the browser.

5. Select the BasicContract and click on the deposit, withdraw, and getBalance buttons to test the contract in Remix:

Using the pragma version and importing another source file
The Solidity file starts with the pragma version, which annotates the compiler version that the contract is compatible with. It is in the format of 0.x.0. The version could be specified as range, which is a comparator which specifies the versions that satisfy the condition. In the sample contract, it is any compiler after version 0.0.0:
pragma solidity >=0.0.0;

Using Contracts in Solidity
Contracts in Solidity are similar to classes in Java, C++, Python, and other Object-Oriented Programming languages. Solidity is contract-oriented, and contracts can contain declarations of state variables, functions, function modifiers, events, and so on. Click on https:/​/​solidity.readthedocs.​io/​en/​v0.​4.​21/​structure-​of-​a-​contract.​html#structure-​state-variables for more details. A contract is defined as follows:

The Address type refers to the Ethereum address of a contract or account. The address is 20 bytes, and any contract could explicitly be converted into an address. The address has functions such as balance (which provides the balance of the address in the Ether unit Wei) and transfer (which transfers Ether to the address).
In the sample contract, two state variables are defined. One is the amount, with the int datatype, and the other is the address of the account that is creating the contract:
int s_amount;

Functions can have the following visibilities:

Functions can also be declared with modifiers such as pure, constant, view, and payable:

In our example contract, we define a function modifier to allow only the account that creates the contract to call the withdraw function:

Solidity offers a full set of object-oriented features and supports interface, enum, struct, inheritance, and so on. In this section, we went through some basic features that we can use to write a smart contract with Solidity. Lastly, good knowledge of JavaScript programming is a must for working with Solidity.

This tutorial is written by Brian Wu who is our senior Hyperledger instructor in Washington DC. His Hyperledger Cookbook with 40+ hands-on recipes is highly recommended.