The latest version of this tutorial along with all updated source codes is available via the below link:
https://myhsts.org/blog/ethereum-dapp-with-evm-remix-golang-truffle-and-solidity-part2.html

Ethereum is a general-purpose blockchain that is more suited to describing business logic, through advanced scripts, also known as smart contracts. Ethereum was designed with a broader vision, as a decentralized or world computer that attempts to marry the power of the blockchain, as a trust machine, with a Turing-complete contract engine. Although Ethereum borrows many ideas that were initially introduced by bitcoin, there are many divergences between the two.

For those who are not familiar with blockchain technology reading History and Evolution of Blockchain Technology from Bitcoin article is strongly recommended. Also, if you wish to learn and practice Hyperledger blockchain development, visit Comprehensive Hyperledger Training Tutorials page to get the outline of our Hyperledger tutorial articles.
We have written two sets of tutorials to explore Ethereum and Solidity programming in depth. First set covered the following nine recipes:

In short, you learned about how to set up and configure Ethereum and develop blockchain applications using Solidity programming language. We explored its key components, including smart contracts and Web3.JS API via an Auction Decentralized Application (DApp) step-by-step.
In second set, we discuss more advance topics in Ethereum blockchain development and solidity while building a Tontine DApp game step-by-step. Specifically, we cover Truffle and Drizzle. For instance, we show you how a tool such as Truffle can be an assistant in building, testing, debugging, and deploying DApps. In summary, we are going to cover four main topics:

The 2nd set consists of 8 recipes as follows:

IMPORTANT: Understanding and completing the first set of recipes are required prior to working on second set of recipes.
In our first round of recipes, we learned a lot about the Ethereum ecosystem, but we are yet to realize the full potential of its different components. More precisely, we explored how Ethereum works, what a decentralized application (DApp) is and how to build one, and also covered the key concepts of Solidity and web3.js. We then introduced some of the most common smart contract design patterns (withdrawal from a contract, restricting access, state machines), before ending with a discussion of a contract’s cost optimization.
To brush up your knowledge and skills, on second round of recipes, we are going to build a Tontine DApp game. We will exploit this example to explore new tools that are going to change the way you build DApps, and introduce new Solidity features.

In this walkthrough, we will discover how a tool such as Truffle can aid in building, testing, debugging, and deploying our DApp.

Once the contracts are migrated, let’s taste the fruit of our labor in action. In the Drizzle box folder, run the following:
npm run start

The tontine DApp web page comes up immediately in your web browser, as shown here:

We have got a clean web page with plenty of forms and game details. Eager to play? Let's have some fun!

Let’s imagine a scenario where we have two players who are willing to play. We will use a different account for each player from those previously imported into MetaMask.
Afterward, register the first player with details (name, phone number) by filling in the Add
Player form in the game interface, and clicking Submit. A popup will open up in MetaMask, allowing you to submit the transaction. At any time, you can check the transaction status in MetaMask. Wait until it’s marked as Successful:

Then, switch between MetaMask accounts and repeat the same operation to add the second player. Note that each player is identified by their wallet address.


Now, as you have two registered players, you can make them join the Tontine game. Successively, for each account, press the Submit button under join game label:

This time, you’ll get a MetaMask popup showing that you are sending 2 ether to the game (as we fixed that amount in our Drizzle code). Confirm the deposit for both players:

In the same way, you can ping the contract for each player.

I'm sure you’ve noticed that once the join or ping action is dispatched, Drizzle will update the ContractData components (player and Tontine details) automatically without refreshing the whole page as soon the transaction is validated.
As we did in testing, you can increase the time in the trial process to try the elimination feature. From a new Terminal, launch Truffle’s console: truffle console.
This will spawn an interactive console connected to Ganache. We use it to run the following RPC calls:

You can check the block’s timestamp using web3.eth.getBlock("latest").timestamp.
After increasing the time by more than 24 hours, both players can be eliminated. Consider eliminating the second player using the elimination form here:

Once the player is eliminated, Drizzle will automatically display the details at the bottom of the web page: 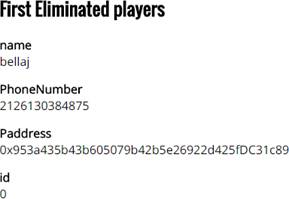 The remaining player should be able to claim and get the due reward (4 ether). During this tryout, we ensured that the Tontine game is working as expected!
As you can see, we have built a minimalist DApp frontend for the game. This choice was intended to give you the chance to elaborate on the design and create a complete frontend for the game. Count it as an exercise for you. You can even build a small Whisper-based chatroom module for the players. For your information, Whisper (not supported by Ganache) is a direct-messaging protocol in the Ethereum network, and it’s fun to work with. I’ll be waiting for your pull requests.

An important takeaway from 2nd round of recipes is to think twice before deciding to deploy your final contract and release your DApp. It’s good practice to always plan your contract- development process before jumping into the code, along with conducting thorough testing either using JavaScript or Solidity to ensure quality and security. Keep in mind that writing smart contracts is a critical task as you’ll be dealing with real money. You don’t want your project to end up in the blockchain graveyard. The rule of thumb is begin with testing locally on Ganache, and then on a Testnet before going onto the real Mainnet. Besides this, asking other developers to review your code is always a good habit.
To summarize, we built a Tontine game from scratch and learned new things about Solidity and explored how to use plenty of tools, including Truffle, Remix, and Drizzle, to build a full DApp.