To write your first application, follow these steps:
1. Set up the development environment:

You will notice that there are a few Node.js file present in fabcar folder such as enrollAdmin.js, invoke.js, query.js, registerUser.js, and package.json and all others packaged into one startFabric.sh file.

You will notice from the following screenshot that the Fabric client 1.3.0 and Fabric CA client 1.30 packages are installed:

3. Execute the following command to launch the network:

4. Open a new Terminal to stream the Docker logs:

This will open the Docker file, which will look similar to the following screenshot: 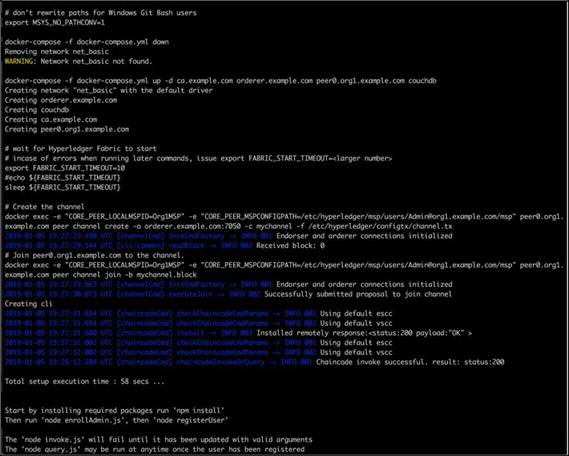 Next, we will use the Node.js script to run, query, and update the records on Fabric network.

Accessing the API with SDK
In this step, the application uses an SDK to access the APIs that permit queries and updates to the ledger. Now we will perform the following steps:

1. Enroll an admin user with the enrollAdmin.js script:

$ sudo node enrollAdmin.js
When we launch the network, an admin user needs to be registered with certificate authority. We send an enrollment call to the CA server and retrieve the enrollment certificate (eCert) for this user. We then use this admin user to subsequently register and enroll other users:

3. With the newly-generated eCert for the admin user, let's communicate with the CA server once more to register and enroll user1. We can use the ID of user1 to query and update the ledger:

4. Let's run a query against the ledger:

5. It returns the following screenshot. You will find that there are 10 cars on the network, from CAR0 to CAR9. Each has a color, doctype, make, model, and owner:

6. The following chaincode constructs the query using the queryAllCars function to query all cars:

//targets : --- letting this default to the peers assigned to the channel

7. Update the ledger. To do this, we will update the invoke.js script. This time, the fabcar chaincode uses the createCar function to insert a new car, CAR10, into the ledger:

//targets: let default to the peer assigned to the client

Here we will complete the transaction when CAR10 is created.

8. Execute a query to verify the changes made. Change query.js using the queryCar function to query CAR10:

//targets: let default to the peer assigned to the client

9. Run query.js again. We can now extract CAR10 from the ledger with the response as

This will result in the following query:

10. Shut down the Fabric network:

We have gone through the steps to query and update the transaction using smart contract chaincode. Now, let's see how it works under the hood.

Put Things Together
This concludes the recipe to create and deploy your first smart contract chaincode.

In the previous steps, we used query.js to query the key-value pair store. We can also query for the values of one or more keys, or perform complex searches on JSON data-storage formats. The following diagram shows how the query works:

The following is a representation of different functions in chaincode, which explains that we should first define the code functions to all the available APIs in the chaincode interface:

The following diagram shows the process of updating the ledger. Once an update to the ledger is proposed and endorsed, it will be returned to the application, and will in turn send the updated ledger to be ordered and written to every peer's ledger:

We learned how to write a small smart contract chaincode on the Fabric network to perform a transaction data query and update. In the next recipe, you will learn how to write an end-to-end Hyperledger Fabric application using all that we have learned so far.

This tutorial is written by Brian Wu who is our senior Hyperledger instructor in Washington DC. His Hyperledger Cookbook with 40+ hands-on recipes is highly recommended.