In this article, we discuss and compare modern foundraising models headed by blockchain technology versus traditional one. In particular, we compare pros and cons of Initial Public Offerings or IPO versus Initial Coin Offerings or ICO. We also discuss ICO bubble and causes behind its downfall.

If you are not familiar with blockchain technology, its history or use cases, reading the following articles in advance is highly recommended:

Also, in our next article we discuss Blockchain Crowdfunding via Security Token versus Initial Coin Offerings.

ICO and its Differences with IPO

In ICO, the word coin can mean a coin or a token. When a proposed blockchain project is to create a new cryptocurrency, coin will refer to a coin. If the new project is to build a platform for a product or service, then coin refers to a utility token. Many people do not separate the two cases and refer to both as utility tokens.

Most of ICOs are completed either via a crowdfunding event or via a private ICO. Before working on raising funds from an ICO, the founders of a blockchain startup write a document called a white paper describing the idea, the business plan, and the project. The paper will also explain the following:

Let's use a hypothetical blockchain project to explain how an ICO works. Suppose you are a motivated entrepreneur who plans to build a blockchain platform for facilitating private tutoring on university courses. This platform will match parties of tutors and students to enter a transaction. Here, a transaction refers to a student paying a tutor for providing the tutoring service. To raise money for financing the education project, you turn to ICO for raising capitals by issuing utility tokens called EduCoin. You will first set up an attractive website and write an appealing white paper to promote your ideas. You will then choose to either hold a public crowdfunding ICO, which is more common, or a private ICO, which is less common.

Let's assume you take the crowdfunding approach. On the internet, you will ask your potential supporters or investors to send you digital coins, for example, BTC and Ether, or fiat currency such as USD. In return, you send them EduCoin tokens based on a predefined valuation formula. The pre-sold EduCoin tokens are a small portion of all tokens, say 5%. Holders of these tokens can receive tutoring services in the future after you have successfully built your tutoring blockchain platform. The holders, however, do not own a share of ownership in your company. If you receive digital coins, you will sell them at a cryptocurrency exchange such as Binance or OKEx to convert them into fiat currency. You can then invest the money into the project. For investors, they hope your project becomes successful and the EduCoin tokens can be used. Consequently, the value of the token increases. Investors can then cash in their investments for a profit.

In July 2013, Mastercoin held their first ICO. Ethereum held its ICO in 2014 and raised 3,700 BTC, an equivalent of $2.1 million dollars (based on the BTC price at the time) during the first 12 hours. In 2017 and 2018, ICO became a very popular fundraising method. ICOs help to raise large sums of money.

This is eye-popping as, at the time when an ICO takes place, a startup does not have a concrete product. Its only product is an idea in a white paper! If any of the blockchain startups had followed a traditional funding approach such as raising capitals from an angel fund or a seed VC fund, the startup would be lucky to raise a small fraction of that from its ICO.

Blockchain startups have heavily relied on ICOs. ICOs skip the early fundraising steps and disrupt IPOs, which are heavily regulated and rigorously monitored. The lack of regulation and monitoring puts investors at risk of losing their investments. Before we proceed to a discussion about the issues with ICO, we will first talk about the differences between ICOs and IPOs:

After the first ICO in July 2013, ICOs have quickly become a primary fundraising method for financing blockchain projects. Since 2014, blockchain startups have raised tens of billions of USD via ICOs. Reports on the total amounts that were raised via ICOs are not consistent. Many websites collect statistics on ICOs. We use data from https://www. icodata.io/, which claims to be the world's biggest and most accurate ICO database, for our discussions.

With data from ICODATA.IO, the yearly total number of ICOs and amounts that were raised between 2014 and 2018 are listed in the following table:

The preceding table shows ICOs taking off in 2016 and reaching their peak in 2017 and 2018. However, the yearly figures are not revealing enough. We need to turn to the monthly graphs (taken from the ICODATA.IO website under the Stats heading) of ICO amounts.

The following graph shows the monthly ICO amounts for 2017: 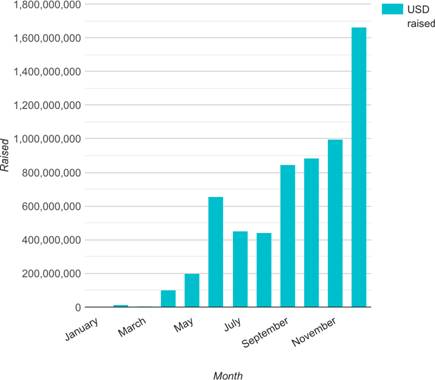 The following graph shows the monthly ICO amounts for 2018: 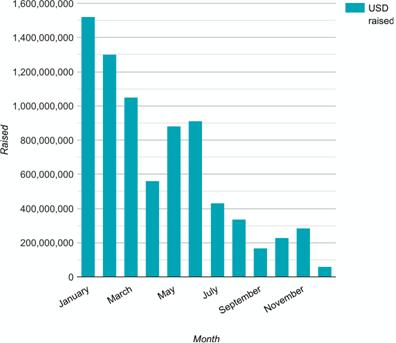 These graphs show that ICO activities reached to a hectic level in late 2017 and early 2018, and then retreated dramatically in the second half of 2018. The most updated figure from ICODATA.IO for January 2019 (as of January 27) is $3.6 m. This is back to the level it reached in January 2017, which is $14 m. Essentially, an ICO bubble has formed and burst within two years.

The gold rush leading to the ICO bubble can be exemplified by one example. In May 2017, a web browser called Brave completed an ICO by raising $36 m, which is the equivalent of ETH (156,250 Ethers) within the first 25 seconds!

The hyper on ICOs is a primary driving force behind a roller coaster path of the cryptocurrency values during 2017–2018. One main reason that led to the burst of the ICO bubble is a high failure rate in ICO funded blockchain projects. Less than half of ICOs have survived over four months after the offering, and near half (around 46%) of ICOs that took place in 2017 failed by February 2018. Consequently, ICO investors, who invested late, have suffered heavy losses. In many cases, they lost all their investments.

ICOs provide an innovative fundraising method that allows people worldwide to invest in groundbreaking blockchain projects. What went terribly wrong with ICO that lead to its dramatic downfall? Here, we list some thoughts on possible reasons:

In summary, the ICO fundraising method lacks proper control. They are open to scams and fraud. SEC has alerted investors about pump and dump schemes in ICOs. In such a scam, scammers inflate the value of an ICO for generating interest and driving up the price of the coins. They then quickly sell the coins to lock in a profit. The UK Financial Conduct Authority (FCA) has also issued warnings on ICO scams. The European Securities and Markets Authority (ESMA) pointed out the high risks associated with ICOs and warned that investors could lose all of their money. China and South Korea have completely banned ICOs.

In addition, SEC has started to crack down on fraudulent and non-compliant ICOs. For example, on December 11, 2017, SEC issued an order against an ICO initiator, Munchee Inc., and declared it to be a fraudulent ICO. SEC also work on setting and enforcing standards in the industry. Social media sites such as Twitter, Google, and Mailchimp have banned advertisements of ICOs on their sites. Other sites such as Facebook, Snapchat, and LinkedIn puts restrictions on startups from promoting ICOs. Internet sites in China such as Baidu, Tencent, and Weibo have also banned ICO marketing. Similar actions were taken by the Japanese site, Line, and the Russian site, Yandex.

Early investors were rewarded handsomely in late 2017 as cryptocurrency prices reaching unprecedented high levels. Being encouraged by the high rewards, new investors chose to ignore these issues. As the prices of main cryptocurrencies such as BTC, ether, and XRP tanked, many investors suffered heavy losses. With their lesson learned from ICOs, the blockchain community now turns to Security Token Offerings or STOs (Read more) for addressing the non-control issue that's faced by ICOs and support the blockchain industry's future growth.

Here is a list of related articles that are highly recommended:

Here is a list of related blockchain classes that are highly recommended: